Home > Rugby Life > Football vs. Rugby > Why Rugby is Better than American Football

The first game I ever played in rugby, after two minutes, I was begging the coach to take me out.

I’ve been living in the UK for a long time now, and just last month I realised that rugby isn’t such a boring sport.  The thought hit me while watching rugby at my London home with my South African husband.  And that got me thinking when he asked me to choose between rugby and American football.

This post may garner negative criticism from many of my American readers, but I’ve come to the conclusion that I prefer rugby over American football.  I confess that, for a while now, I’ve regarded American football with some uncertainty.

I’ve never been a diehard NFL supporter, so I’m not your typical American.  I didn’t grow up watching it like the average American who eats, dreams, and breathes the NFL.  According to The Nielsen Company, the 2014 season reached 202.3 million unique viewers, representing 80% of all television homes in America!

First of all, if you toss in the time-outs and all of the stops, a one hour game of American football can take about three hours to finish.  That’s three hours for 60 minutes of playing time!

The Wall Street Journal analysed NFL games back in 2010 and discovered that a game that takes nearly three hours to watch should only take 11 minutes because that is all the action you get.  The play stops and starts with the frequency of a car driving through downtown traffic in Los Angeles.

Rugby, of course, is a vicious sport, too – closely mirroring a scene out of Fight Club than a competitive game, but it is also one that combines extreme self-control to help them with their aggression.

WHY AM I WATCHING RUGBY NOW?

Well, my South African husband really enjoys rugby.  He grew up playing it and like a good South African – he’s a zealous Springbok supporter.  Thus, our ears have been hearing a lot of rugby since the beginning of the 2015 Rugby World Cup.

I even managed to attend my first ever rugby match a few days ago – observing South Africa’s Springboks thrash USA’s Eagles 64-0 at the Queen Elizabeth Olympic Park Stadium here in London.  In a crowd of 54,658, I was probably the only Texan outwardly supporting the Springboks.

Yet an overwhelming wave of pride hit me once they sang The Star-Spangled Banner.  Deep down in my heart, I really wanted them to win the game or at least score once.  The Eagles played valiantly the first half of the game despite openly being bullied by the Springboks.  However, come the second half, and the Springboks came out firing on all cylinders – they clearly must’ve had a serious half-time team-talk.

Related:  7 Reasons Why Rugby is a Better Game Than American Football

How do I put this gently?  The USA needs A LOT of help in rugby, the sport that spawned American football.

WILL AMERICANS EVER WARM UP TO THIS GREAT SPORT?

According to a 2014 study by the Sports & Fitness Industry Association, rugby is the fastest growing team sport in America.  The report showed rugby growing by 81% from 2008-2013, while basketball, baseball and American football participation took a nose-dive into the abyss.

“Rugby is the fastest growing team sport in America, but the sad thing is it’s still amateur.  When you’re born in South Africa, instead of getting a pacifier you’re given a mouthguard, but in America it’s not like that.”

As stated by the report, kids in the 6-12 range are playing the sport that was born in 1823.  Interestingly enough, American football-dominated Texas is the third-largest rugby-playing area in the USA, after the north-east and California.

The UK is saturated with touch rugby classes for children as young as two-years-old.  Who knows, maybe my sisters in America will enrol their children in touch rugby after reading this.

Will Americans become full-fledged rugby devotees?  Will they obsess over rugby like they do with the NFL, Major League Baseball, and the NBA?  Who knows.  We tend to gravitate towards our own national sports instead of fully embracing non-American sports like cricket, football (soccer), or rugby.

One English guy named James told me, “I think Americans only watch their own sports because most of them are self-centred and arrogant.  Plus, loads of them have attention deficit disorder, so our sports wouldn’t appeal to them.”

A French girl named Noémie commented, “I heard that there are many Americans who have never travelled outside their native state, so no wonder they don’t watch international sports.  They only care about themselves.”

Noémie’s statement made me do a quick search to see how many Americans actually own a passport.  I found that of the 311 million United States residents, only 35% possess a valid USA passport according to a 2012 study by the State Department.

While I respect their opinions, I think it has more to do with those money-hungry corporations who control the media.  Not a lot of revenue can be made in a short rugby match compared with a three hour NFL game.  Remember TV commercials bring in lots of dough for marketing.

Now for what you’ve been waiting for… 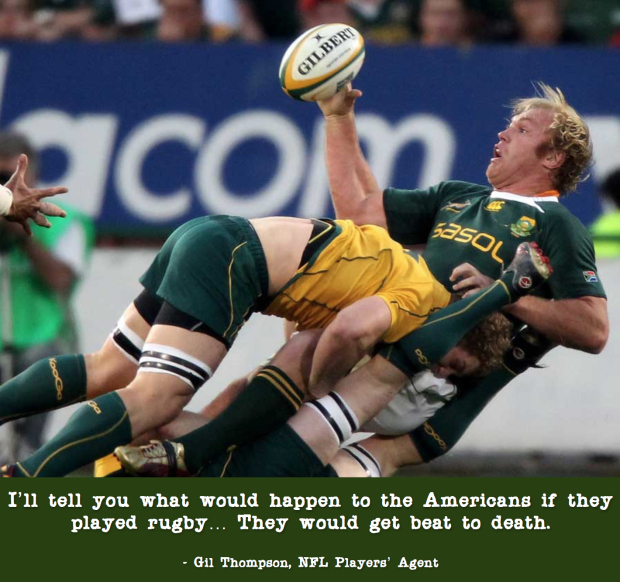 More Skilled  –  American football players only have one job to do on the field – except of course for the quarterback.  Hardly any of them play offence and defence.  However, rugby players must be adept in running, tackling, and handling the ball.  Plus, half of them need to know how to kick the ball – whereas football players are specialised in certain abilities, making them less skilled as athletes.

Tougher and Fitter –  Rugby players play without helmets and excessive padding.  Head collisions are scarcer in rugby, mostly because playing without head protection means players don’t believe they’re invincible.  On top of being stronger, rugby players are in peak physical shape unlike some NFL players who require oxygen masks on the sidelines, so they can catch their breath from all of the “intense” running of 10 seconds.  I highly doubt many of the NFL players can last an 80 minute rugby match.  One rugby fan told me, “You have to be a superior athlete to play rugby.  You are running continuously, so you can’t be 200kg and play rugby.” 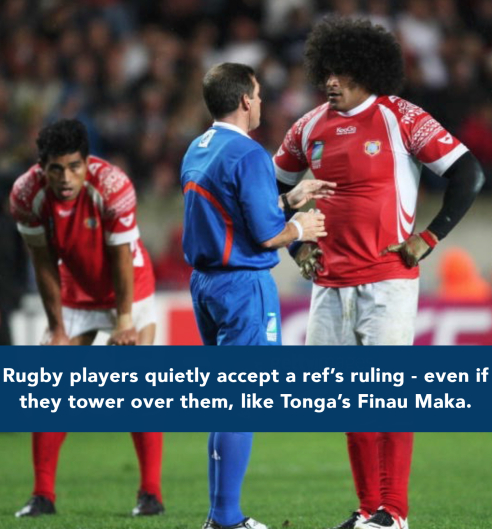 Trained Gentlemen and Humility –  “Rugby is a beastly game played by gentlemen; soccer is a gentleman’s game played by beasts; football is a beastly game played by beasts.” Henry Blaha couldn’t have said it better.  Rugby’s values of discipline, respect, sportsmanship, and humility make the matches special for fans and players alike.  The players learn about chivalry and good manners as children.  Swearing is banned and frowned upon during practices and matches.  Plus, you won’t see ridiculous celebrations after scores or see a player argue with a referee like in the NFL. The NFL is infested with arrogant players and coaches, which for me is a complete turn-off.

The difference between rugby and most other sports?  After being called for a penalty, six-foot-nine, 260-pound, 22-year-old South African forward Lood de Jager said to the referee: “Sorry, sir.”

Like it or not, the world is getting smaller, and we’re headed towards a unified world order – so it’s impossible to turn our backs on the rest of the world’s sports.  I do hope that this post has made you consider giving rugby a chance.  Perhaps one day rugby will be included in all American schools and not just at their elite colleges like Harvard, Yale, and Stanford.  Now last, but not least – Who’s my pick for the final rugby match?  South Africa vs Australia with of course South Africa taking home the coveted Webb Ellis Cup.

What are your thoughts?  Do you think I’m full of nonsense or do you agree with me?  It’ll be great to hear what you guys have to say.