Home > Rugby Life > Football vs. Rugby > 7 Reasons Why Rugby is a Better Game Than American Football 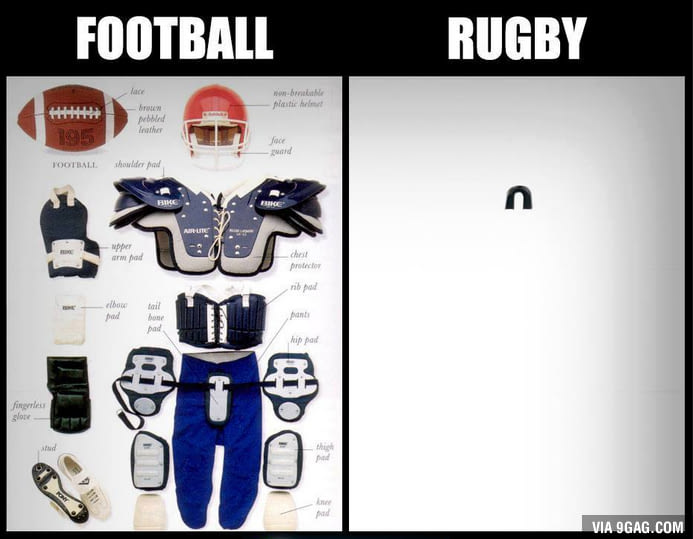 I know you guys across the Pond will be furious—but here in Europe we have a ball game which leaves your so-called ”football” for dead.

If you Yanks hadn’t disappeared from the real world into the Bushes (by George, what a clever play on words), you would realise that FOOTBALL is actually the game the rest of the world plays—the one you refer to over there as ”soccer”.

I mean, how can you call a game football when the only time anyone kicks the ball is to convert a try or land what you call a ”field goal”?

A try? Well, in the real world that’s the term we use for a touchdown. And by REAL world, I mean the entire globe, not the planet according to that admittedly quite large piece of land between California and New York.

The game I’m talking about, by the way, is called rugby. You may have heard of it—in fact you made a rather pathetic attempt to copy it when you nicked our oval-ball idea in order to invent your own grid-iron game way back when.

In fact, I’m told the intelligent guys among you still play rugby quite a lot at university. And I’m not talking about College Football. Why anyone should care so much about the kids’ version of grid-iron is another mystery to us Brits.

Rugby is just as tough as your game, if not tougher. Only our players don’t dress up as bouncy castles and plonk motorbike crash helmets on their heads. What’s all that about, for heaven’s sake? Apart from anything, it turns the hundreds of players in every team into faceless zombies.

Unlike American Footballers, Dan Carter has both running AND goalkicking talents.

I believe the original distortion of the rules of rugby in the United States was largely due to some guy called Walter Camp (who presumably was a lot more macho than his name). It’s so sad because had you stuck to the REAL game invented by William Webb Ellis at Rugby School in 1823, you guys could have been a real force at rugby.

Related:  Why Rugby is Better than American Football

Maybe even in the same class as the mighty New Zealand All Blacks, the most successful international team of all-time.

You talk about your quarterbacks. Stars like Brett Favre, Peyton Manning and Tom Brady. Well, we have guys called outside-halves, who are the ultimate playmakers and in Dan Carter the Kiwis have as brilliant a player as the world has ever seen. He also kicks goals from 60-degree angles, rather more subtle than your field-goal experts who merely have to boot them over from in front of the posts.

Anyway, you chose to create your own version of the game. Fair enough, even if you did bend every rule that existed to the point that you even allow the ball to be passed FORWARD. How ridiculous can you get?

OK, we did make a bit of a mess of things over here early last century when the political shambles over professionalism saw the game of rugby split into two codes. But they remain very similar—and these days players can switch between rugby league and rugby union with little problem.

To sum up, these are the reasons why American Football is to my mind subservient to rugby (either code).

1. Rugby is a worldwide game, while American Football is played seriously in only a handful of countries. Well, not even that – just the US and Canada, really. The International Rugby Board rankings list 94 nations (the USA is actually 16th, so there’s still hope for America if you come over to the real world). New Zealand is ranked No.1 at rugby union and, since you have a population 100 times as big as theirs, the sky should be the limit. And the Aussies are best at rugby league, so you’ve got a chance to bring the cocky so-and-so’s down to earth.

2. Rugby is all action for 80 minutes. American Football is all inaction for four hours—arguably the slowest game on earth. Jut try turning the TV on at random in the middle of a game. If there are not ads showing and something is actually happening, it’s a miracle. And if anyone says cricket is slower, I’ll let Geoffrey Boycott loose on them (in-joke for the Brits).

3. Rugby players lay into each other like real men, with just the flimsiest of body padding. Grid-iron players are unrecognisable as human beings with all that body armour.

4. Rugby is played by two teams of 15 players (13 in rugby league). Between them, they have expertise in both attack and defence (note correct spelling of defence). Grid-iron players aren’t good enough to attack AND defend, so a squad of immobile 300-pound elephants are programmed to come on and stop the attackers, who are the only guys who can really play the game.

5. Rugby does not need flimsily-dressed cheerleaders to give the male fans some real excitement. We also celebrate the scoring of tries with applause and back-slapping, not lots of ridiculous dancing and high fives.

6. Rugby is played in ALL conditions—on grass, not synthetic turf, as seemingly used by most NFL teams. That stuff is more dangerous than the opposition, for heaven’s sake. I’ve never seen a grid-iron game played in mud and pouring rain, though I am told it does happen on occasion. Now that would be worth watching even for a cynic like me!

7. Finally, and most important, this article is all a bit of fun and not to be taken seriously. I’m a woman who was reared on rugby union (I’m actually from Wales, where rugby is everything). The reality is that the best game is the one that appeals to YOU.

It’s all subjective so whatever your preferences, may the best game win! (Wales is the bit that sticks out to the left of England on the map, by the way).

Now let’s get down to things that really matter. Which is better…rugby union or rugby league?